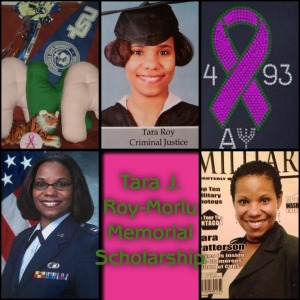 Tara, affectionately known as T. Roy, is a 1993 initiate of the Alpha Psi Chapter of Alpha Kappa Alpha Sorority, Inc. at Tennessee State University, where she majored in Criminal Justice and Sociology, and graduated in 1996.  While at TSU, Tara was a member of the Air Force R.O.T.C., which launched her successful career in the military, and as a civil servant, following in her father's footsteps.

In 2007, Tara was diagnosed with breast cancer and overcame it. She was re-diagnosed two years later, and once again had her full health restored. In 2011, she was diagnosed for a third time, however this time, the disease had begun to spread throughout her body. Strong, determined, courageous, graceful, faith-filled, obedient, humorous, and inspiring Tara fought this disease everyday, until her last on March 16, 2013.

Tara endured the effects of the cancer and its treatments while beginning her Ph.D. studies and continuing to work full time, with the National Geospatial Agency. Her husband, Lasana, and her three children, Myles(12), Gavin (8), and Mykala (2), fought by her side and have been supported by her loving family, TSU alums, AKA sorority sisters, military personnel and a whole host of friends, colleagues, and survivors from all over the country.